‘Takei Bole Ami’ You Are Said to Be Me

Rabindranath Tagore was a multifaceted personality. While considering him as a person we see that many aspects of his life were multi-dimensional. He was constantly preoccupied by the question of truth, for example: his conversations on truth and the questions on his own physical presence. A large part of Tagore’s existence was focused on the conflict within himself. Throughout his life he cultivated this dual idea of the ‘Self and Me’- these words surface constantly in his various writings and in his presence, which are depicted through images created by himself and others.

This show is a  brief  presentation of  his presence  through different types of graphics  as well as his own thoughts on the  Self and Me.  His portraits are not mere portraits but reveal elements of the wider India and World. While all the representations on him add to the explanation of his identity, for this exhibition I have chosen some of his extra ordinary portraits that are marked by a strong vocabulary.  They also help in explaining the dual preoccupation with the Self and Me in the context of Tagore’s representations of himself.

These two words are intimately related, yet Tagore was constantly torn between his own physical existence and the powerful presence of his mind and his inner self. We can see this in his letters, graphical representations, doodles, in which he is watching another portrait of Tagore. Despite his attempts to explain and justify his position, he was unable to adopt a clear approach to this inner conflict, and the constant shifts in his perception are evident to his readers. His son Rathindranath Tagore once said in his book On The Edges of The Time that he found it difficult to understand a personality like his father, he questions who  Tagore was as a father as well as an internationally recognized poet. He remained an enigmatic personality, who was constantly seeking intellectual stimulation. We could say that Tagore’s personality remained a mystery and this may be one of the reasons he is still too attractive to scholars, who are constantly seeking to better understand the different facets of his complex personality.

Tagore tried to express himself through words, to explain the conflicts that ran through his own perception of himself- as a person and as a poet. The way he depicts himself in the images, however, is different. We can perceive the unending conflict between his conscious mind and his inner soul, some of these issues are revealed in his own words, essays and personal letters. A lot of the images on him depict him as an idol, this is particularly visible in the most popular images, the ones we see in every Bengali home, and he was probably largely responsible for creating the aura around him and on the image of himself.

Dreams and reality were distinct worlds; each very powerful and certainly fed into each other and maybe even overlapped at times. Questions of emotional attachment and responsibility resurface constantly throughout his life and his work and are never fully resolved. Every instant of his life was a process of cultivation, realization, excavation and execution and these burning concerns that inhabited every moment probably led him to see his own reflection more clearly, forcing him to question himself endlessly.

My Art Practice and My Interest Part -1Uncategorized 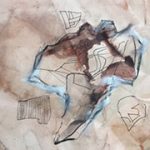