Sitting under a tree near Lalbandh [A water reservoir] Rathindranath Tagore, and Surendranath Kar having discussions about protecting the damage on erosive land near Lalbandh. That was not a sheer beautification plan for Santiniketan. However, the idea was to preserve the porosity of the soil and preserve the landscape. During 2007-08 research on Architecture of Santiniketan, a fact surprises that to implant cactuses at barren land of Santiniketan need a prior plan before they seeded. Advance policy and discussions a daily routine for Rathindranath and Surendranath those days. A team spirit has rooted in the graphical representation of Santiniketan as space for life and education. Surendranath Kar and Rathindranath Tagore was the leading among the team members to execute the dream of Rabindranath. Rathindranath is a lesser-known name in the art and design world. But his silent contribution is a spine of Modernism in Santiniketan.

A small double story studio, first floor called Chitrabhanu and ground floor called ‘Guhaghar’ [Cave House]. An experimental laboratory at Uttarayan premises in Santiniketan, Designed by Rathindranath Tagore. The first floor was Pratima Devi’s studio. Wife of Rathindranath and talented personality. Her contribution may elaborate in separate essays at other times. Ground floor space dedicated workstation of Rathindranath. He has experimented on Woodworks and beyond. The small studio made history in Santiniketan apart from Kala Bhavan. It has a silent presence next to gorgeous Udayan house at Uttarayanpremises in Santiniketan. Notably, all the Rabindranath’s residences at Uttarayan complex has a substantial existence presence. It also shows the grand aura of Rabindranath, the illustrious father of Rabindranath. Guhaghar lost
among the dominant presence, and Rathindranath fainted in memories. Student days never imagined an exceptional architectural space as an artist’s studio-like Guhaghar.

Rathindranath studied agriculture, but he has extended his varied interest to build Santiniketan. He has inspired the daily life of Visva Bharati with artistic interventions. Leatherwork and wooden furniture were a landmark contribution by Rathindranath, which still worth discussing. His woodworks contemplate the local landscape and feel of split levels. His woodwork has a sensitive and urges growing with the interior of architectural space. The formation of wood joints is not superficial geometry but more like interactive artworks. He has infused Asian and European aesthetics to create an unfamiliar language.
Past years of the twentieth century in Kolkata, Jorasanko Tagore’s house started the foundation of the experimental cultural lab in Kolkata as Bichitra Sabha.

Rathindranath expanded his vision with varied materials, including his experiments with garden, scientific applications in agriculture, Small and big wooden items, paintings with a focus on precise nature and vegetations. But bringing attention to multi-utility furniture at Guhaghar is an unfamiliar language. It is an early example of shared and private space in those days. Discovering the furniture resonating the musical landscape of Santiniketan. The form and structures have Japanese influences, but he has successfully synthesized the outcome. The Cave house was a muted space with many experiments. The resultant still claims re-evaluation in studio house needs more light for distance sight.

Woodworks, Leatherworks, and an extensive section of utility arts never projected as an integral body of Santiniketan art. Introducing leather works at Kala Bhavan is an extraordinary contribution. This fresh addition sparks a sphere of team spirit and extended in Sreeniketan, Shilpa Sadan. Leatherworks become a signature style of Santiniketan school of arts. But this essential contribution has pushed far behind in Santiniketan and later tried to prove only a few names. The team spirit of Kala Bhavan not acknowledged. The presence of Shilpa Sadan and Karu Sangha hardly lit up.

After the Fifties, a new politics started by scholars at Visva Bharati. Only a few names have planned as a projection of Santiniketan. This attempt also started personified screening of account which may frontally face of Santiniketan. The crude politics and authoritarian concepts erased many artist’s names and their contribution. Rathindranath is also a victim of the situation. Positioning in history is a complex politics, and Rathindranath stayed far from those sequences. The administrative works of Santiniketan and the needs of his father also kept him busy. Documents reveal that his only mission was to preserve the tangible philosophy of Visva Bharati after his father’s death. But the purpose
was unsuccessful for many reasons.

Studied in Santiniketan curiosity never ends while a solitary walk on erosive land called as Khoai. I never felt tired and thirst to look for a new horizon. One may recall similar experiences through the woodworks of Rathindranath at Guhaghar. Various houses at Santiniketan was also an exciting subject for painting and sketching as a student of Kala Bhavan. So, one day sat Infront of the Guhaghar and painted with tempera process. This tempera on Nepali paper has done during 1994 without knowing many details background of the house. It was then only challenging to express the meditative quality and integrity of the house through the tempera process. Tempera medium has an energy build with many layers. The colours appear from the paper surface, a unique technique I have learned at student days.

Research on Rabindranath is an ocean now, but the Archives of Rabindranath would not grow at Rabindra Bhavan Museum without tireless support from
Rathindranath. His unique experiment with woodworks is far away from Bauhaus’s works. Indian art history needs periodical, location-based discussions that should include all forms of arts, including archaeological references. The archival excursion also requires driving through small lanes and allays, not just a lengthy drive on highways.

Rathindranath left Santiniketan with a bitter experience and stayed at Himalayan foothills rest of his life. A modernist beyond Kala Bhavan not much recognized. His Cave house now become a small museum, but many of his essential works and working tools developed by him is no more there. Enduring Spirit of Rathindranath and his work is much alive. Need to explore.

A glance of Guhaghar, Tempera on Nepali paper 1994 Samit Das 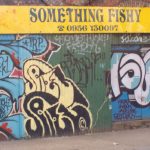 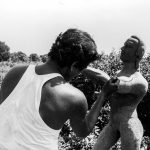